Nowadays, choosing a second hand boat is not an easy task. It took us a couple of years to find our rare pearl. There are so many different brands and designs of sailing boats for sale on the internet, that you can easily get confused.

Since the classic yacht era of the ’60s, the shape of hulls changed drastically. At that time, boats were heavy and hulls generally long keels: boats were build to last but not to be fast ! On the other hand, today it is quite rare to find in marinas classic long keel boats. The modern sailor seems to prefer fin keels and fast sailing perfomances.

From the beginning of our search, we decided that a modern fin keel boat was clearly not for us. Why ? Imagine you have a hull coming out of a mould and then a keel is just bolted on a nearly flat surface ! Just by looking at those modern shapes you can already feel the banging when going up wind in a choppy sea…

Of course those modern hulls are much faster and have more interior space compared to a traditional long keeler.

For us, hull shape is more about the motion of the boat on the water than her speed. Some could ask why we did not choose a full keel boat ? Well, the thing is that choosing a boat is often about making a compromise. And we were in-between a heavy dispacement hull and a fast and spacious modern boat. Neither of those were satisfiyng our conception of sailing. It looked like the Contessa 32 was just what we needed.

She hasn’t got a long keel, but her ballast is still part of the hull and she is not as slow as a heavy displacement yacht…Actually not slow at all !

She is something between an old classic and a modern fast sailing machine.

But, there is something more about the Contessa 32. It is not just a 32 footer with a great reputation. It seems that her hull shape, displacement and lines are just right and this combination is what makes her so special.

The other day, I was contemplating our lovely Contessa, which at the moment is lying on the hard, and I must confess that I was once again admiring her “S-shape” from the bow to the keel foot. This beautifull shape was born from an inspired designer called David Sadler and a very skilled boat builder called Jeremy Rogers. She was conceived at a time when seaworthiness was still a priority. And the incredible thing is that after more than 40 years, she is still built by the same yard in Lymington: Jeremy Rogers Limited. 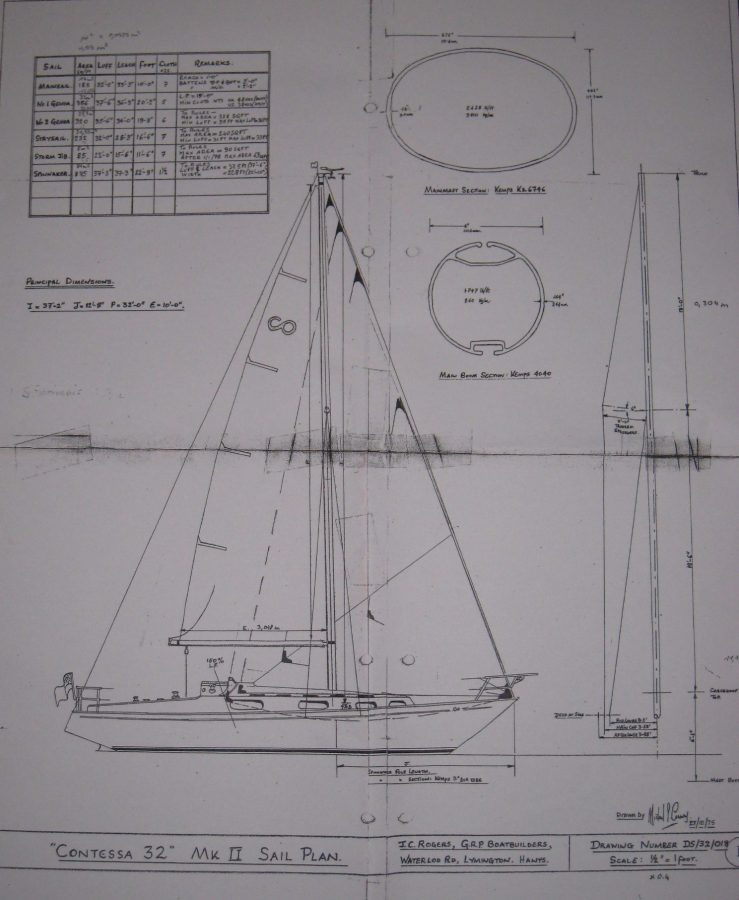 In the early ’60s, J. Rogers was already building cold-moulded Folkboats. He met with D.Sadler who at that time was a customer of his and put for the first time a masthead rig on his folkboat. This was like a revelation as the new rig performed very well. The idea of building a 26 footer with the shape of a Folkboat slowly found its way and gave birth to the famous Contessa 26. The CO26 was designed by D.Sadler and launched in 1966. It was a great success and a lot of those were ordered and built by J.Rogers in Lymington. Then the need of moulding a bigger boat came along. The IOR criterias of the ’70s were slowly changing and D.Sadler reshaped the long keel of the CO26 into a semi-long keel with skeg. That was the beginning of a new era for a faster design, which turned out to be extremely efficient upwind.

The Contessa 32 was exhibited at the 1971 London Boat Show and in 1972 won the prize as “Boat of the Show”. The demand was so high that the buidler couldn’t keep up and there was already a two year waiting list ! At the end of the 1970s the Rogers company in Lymington was employing 200 people. The collaboration in between Rogers and Sadler ended in the ’70s but the Contessa 32 had become famous.

Very quickly she proved herself during the sadly famous Fastnet Race 1979 when CO32 Assent was the only boat to finish in her category out of 58 boats. Seaworthiness is probably the main characteristic to remember when talking about the CO32.

From a design point of view, it is interesting to look at the AVS (Angle of Vanishing Stability) of the CO32. In Yachting Monthly (April 2015), we found a very instructive article by Nigel Calder & Chris Beeson explaining what this AVS is all about.  They compare the Contessa 32 with the Bavaria 32.

In the first lines of this article we can read: ” The angle of vanishing stability (AVS) is a measure of how far a boat can heel before she rolls over and inverts-in other words, her resistance to capsize”.

And further down in the same article: ” Even with her mast 66 degrees below horizontal, the Contessa 32 still rights herself” !

In a previous technical article edited by Yachting Monthly (February 2010), the Contessa 32 was already compared to the Bavaria 32 using a more comprehensive set of criterias including perfomance, sailplan, deck layout, accomodation etc…At the end of the article there are marks for both designs showing the weak and positive points. These marks show clearly that the Contessa 32 is not as comfortable down below as the Bavaria, but under sail she is far better. Again, the CO32 is probably not a boat for sailors who like to spend their time in marinas. But what about moving around the boat when sailing in rough seas ? Everything then becomes subjective regarding the safety, the ergonomics and the confort of the interior layout. What we really like on the CO32 is the very classical interior and a practical accomodation when at sea.

When going down below, you get immediately the feeling of being in a classic marine interior. The galley situated to port is compact but usable when heeled. The chart table on starboard has a nice size to unfold a proper paper chart and the saloon berths are very wide and comfortable even for a tall person. Of course, she is not beamy and that means a bit less room under deck but there is enough storage space and every little area is well conceived. One of the very nice internal features is the adjustable table which can lower down and create a spacious double bed.

Very often in sailing books or magazines you read that choosing a boat is all about compromises. This is certainly true. Choosing the right boat, depends probably much more on your sailing aspirations than on the boat itself. A Bavaria 32 might be very suitable for anyone who wants to enjoy a few weeks cruise every summer around the Greek islands. But for us, having a boat and living on it is a life dream. We wanted our boat to be something special, something different from the mass production sailing caravans. Even if that meant less space and a more modest way of life !

After working on the boat for a few months, we have to admit that the only really narrow and difficult area to access is the engine room. Nevertheless, you can get to the engine from the front and from both sides which is already reasonable for a boat of this size. In general we think that there is enough space for a couple to enjoy long journeys and to live aboard a few months every year. But again, this is a very subjective point of view. Some sailors need much more living space and would never fit themselves in a Contessa 32. Some others, like Roger Taylor with his minimalist junk rig MingMing have achieved incredible journeys on a tiny boat like the Corribee 21.

Our point of view is that seaworthiness has nothing to do with size and that it is preferable to have a smaller boat that you can manage when shorthanded, instead of being faced with larger forces when things get tough. And one more thing about size which we have to remember: the budget. A smaller boat is always cheaper to keep and maintain than a bigger one. As we all have heard or experienced: big boats….big problems…